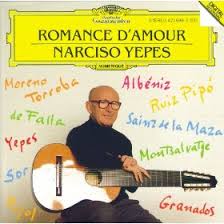 Its origins and authorship are currently in question. It is suspected of originally being a solo instrumental guitar work, from the 19th century.
….